While I was watching the chickens last week, an uninvited guest arrived to see what was going on.  At first, I saw it out of the corner of my eye, but when it saw me it quickly went under the ramp at the gate to our coop.  Not knowing exactly what it was, I called my neighbor so he could help ID this creature and chase it away if necessary.

He quickly arrived and grabbed the middle end of the ramp and began to lift it when I told him that it just went under that part of the ramp and was probably right by his hand.  He let it drop to the ground without any hesitation.  Then he grabbed a shovel and slowly flipped the ramp over to revealed a chicken killer.

I snapped a picture right before it attempted to escape…into the coop area.  My neighbor chased it as he repeatedly struck the ground right behind it with the shovel.  He was trying to kill it, but it was too fast for him.  It headed for the fence and escaped through one of the holes in the chicken wire. 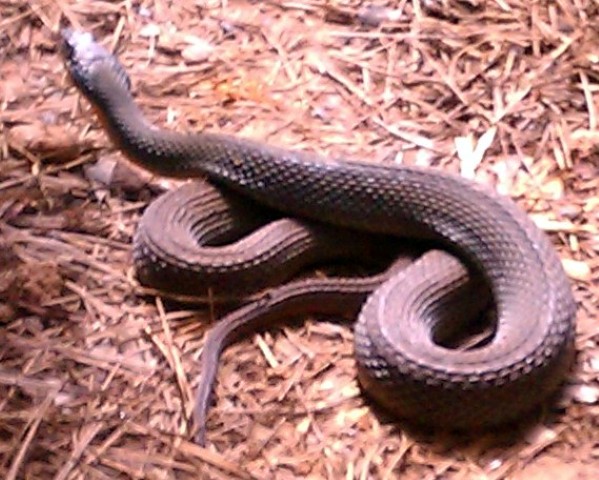 I’ve been told that this is a rat snake, which is not venomous.  However, it would love to strangle and eat our smaller chickens.  Please post a comment if you know what it is.

Whatever it is, I just hope my neighbor scared it enough so it won’t want to come back.  But I’m still keeping a shovel by the gate, just in case.