Why are our tilapia growing so quickly?

Tilapia are genetically designed (by mother nature, not scientists) to grow very quickly in the right environment.  Here are a few of the things we have done to create the ideal environment and to help expedite the growth process in our fish:

Food: We feed our fingerlings as much as they can eat, four or five times a day, a high-quality feed from Premium Fish Food Company called Tilapia PowerStart Fingerling Crumble.  This feed provides what a small fingerling needs to grow quickly and to stay healthy (at least 50% protein and 17% fat, vitamins, etc), and the fish love it.  When it’s feeding time, the larger fish get so excited they almost jump out of the water to be the first one to eat, while the smaller ones wait near the bottom for the food to come to them.  We are still debating whether the smaller fish are lazy or just afraid they’ll get squashed, or eaten, in the feeding frenzy above.

The crumbled food might not be the most exciting food to the small fish, but they absolutely love to gorge themselves on live, freshly-hatched brine shrimp at least once every day (If you’re not sure what a brine shrimp is, do you remember Sea Monkeys?  Well, they’re not really monkeys; they’re brine shrimp.  I was so disappointed to learn this as a kid.).  In fact, they devour this delicacy faster than any other food we have given them so far, probably because young tilapia love to eat live food (they even eat their smaller brothers and sisters if they’ll fit in their mouth).  The larger ones eat the brine shrimp as well, but they seem to get bored with it quickly.

Some foods haven’t appealed to any of the tilapia yet.

We dropped in a red wiggler earthworm one day, but they just watched it sink to the bottom and burrow into the gravel.  We never saw it again.  I probably should have cut it up into bite-size pieces first, but I thought it would get a little too mushy if I did that.

Spinach and other greens are another food they don’t care for yet.  When a couple of small pieces of spinach were placed in the tank, they completely ignored them.

They also ignored the green water (Nannochloropsis phytoplankton) we poured into their tank, but, since it’s their main food source in the wild, we are fairly certain that they benefited from it.  The gills of tilapia secrete mucus which then collects plankton and other small life forms as they pass through the tilapia’s mouth and out their gills.  They swallow this mucus and plankton combo meal throughout the day.  Unfortunately, the plankton fouled up the water too much so we stopped feeding it to them.

Temperature: The water is heated to between 84° and 86° F.  This warm water accelerates their cold-blooded metabolism, which causes them to eat more.  Since they gain about one pound of body weight for every 1.7 pounds of food consumed, they can pack on the pounds quickly.  In comparison, bass gain about one pound for every 10 pounds of food they eat.

Oxygen: As the water temperature rises it holds less dissolved oxygen (DO), so we insure the tilapia get plenty of oxygen by using a Tetra Whisper Deep Water Air Pump 300 and two air stones.  The DO is always over 5 ppm (parts per million), and usually over 10 ppm.  Our aquaponic system will use two of these air pumps and at least four air stones (two in the 300 gallon fish tank and two in the grow bed).

Water Quality: Since we feed the tilapia so much, the water tends to get a little cloudy by the end of the day.  Lots of food = lots of poop.  To insure a high quality environment, we siphon the gravel and change out 10%  to 25% of the water every day; however, the water changes could be dangerous, because we use chlorinated tap water.

Since the chlorine and chloramine in the water could harm or even kill the fish, we make it safe by organically neutralizing the chlorine before adding new water to the tank.  We do this by adding about 1/8 teaspoon of powdered Sodium Ascorbate (Vitamin C) for every 55 gallons of water, or a fraction of this for smaller volumes of water.

We could use the Ascetic Acid form of Vitamin C, but this tends to lower the pH after a while, whereas the Sodium Ascorbate tends to buffer the water to help maintain a neutral 7.0 – 7.5 pH.

We could also use some of the more common chemical dechlorinators on the market, but, since we are planning to eat the fish, we avoid the chemicals (Thanks to Sarah Weissenbach from TilapiaSource.com for recommending Vitamin C).

There is another benefit to using Vitamin C; it gives their immune system a little boost so they stay healthier and are less susceptible to parasites and disease.

Here is a link to a dosing calculator that helps us determine exactly how much Vitamin C to add based on the volume of water we are adding and the amount of chlorine in the water.

So why are some of the tilapia growing so much slower than the others?

While about 80% of the tilapia are growing very quickly, the other 20% are still very small even though they are in the same environment as the larger ones.  Suspecting that larger fish may be affecting the growth rate of smaller fish (maybe they are eating all of the food and the smaller ones are left with the scraps), we moved two of the smaller ones to a 29 gallon aquarium with some fathead minnows and rosy red minnows.  After a couple of weeks we noticed that one of the two is now much larger, but the other one still looks like it hasn’t grown at all.  This was unexpected. 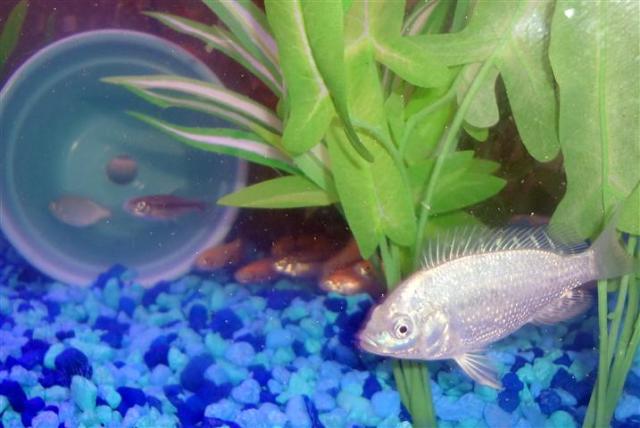 We have heard that females grow slower than males so this may explain the difference in growth rates, but I don’t think so.  I suspect that the females grow slower only while they are incubating their eggs in their mouth, so they don’t eat during this time.  Since our fish are not of breeding age (16 – 18 weeks) yet, there must be another explanation.

We are a little concerned that the tilapia are going to get too big for our aquariums before it gets warm enough to put them outside.  Hopefully, we can do this in late March or early April.  Until then, we will reduce their food and prepare the water for them by cycling the 300 gallon tank with ammonia and a gallon of ProLine Nitrifying Bacteria.  This will establish the bacteria in the water that will convert the ammonia from the fish to nitrates for the plants.  This is very important, because, without these bacteria, the ammonia will build up in the water to dangerous levels, which will kill the fish, and the plants will not have the nitrates they need to grow.

Well, that’s all for now.  We will post more photos of the fish and the aquaponic system soon.

9 Responses to Why are our tilapia growing so quickly?